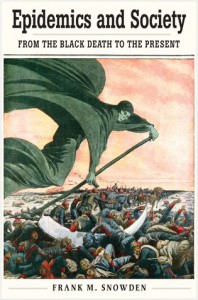 TITLE:   Epidemics and Society: From the Black Death to the Present

"A wide-ranging study that illuminates the connection between epidemic diseases and societal change, from the Black Death to Ebola

This sweeping exploration of the impact of epidemic diseases looks at how mass infectious outbreaks have shaped society, from the Black Death to today. In a clear and accessible style, Frank M. Snowden reveals the ways that diseases have not only influenced medical science and public health, but also transformed the arts, religion, intellectual history, and warfare.

A multidisciplinary and comparative investigation of the medical and social history of the major epidemics, this volume touches on themes such as the evolution of medical therapy, plague literature, poverty, the environment, and mass hysteria. In addition to providing historical perspective on diseases such as smallpox, cholera, and tuberculosis, Snowden examines the fallout from recent epidemics such as HIV/AIDS, SARS, and Ebola and the question of the world’s preparedness for the next generation of diseases."

Snowden provides an interesting overview of how societies (and their governments) at various times and places dealt with disease epidemics.  The epidemics discussed in this book include the 3 bubonic plague epidemics, smallpox, yellow fever, cholera, TB, malaria, polio, HIV/AIDS and emerging diseases such as ebola and SARS.  Also examined is the effect these epidemics had on historical incidences such as the outcomes of wars and changes in culture; for example the effects of yellow fever, dysentery and typhus on Napoleon's war efforts.  An interesting, informative, easy to digest, but not frivolous, look at how disease epidemics effect society.