TITLE:  Notre-Dame:  A Short History of the Meaning of Cathedrals

"“The wonderful cathedral of Notre-Dame de Paris, one of the greatest achievements of European civilization, was on fire. The sight dazed and disturbed us profoundly. I was on the edge of tears. Something priceless was dying in front of our eyes. The feeling was bewildering, as if the earth was shaking.” —Ken Follett

In this short, spellbinding book, international bestselling author Ken Follett describes the emotions that gripped him when he learned about the fire that threatened to destroy one of the greatest cathedrals in the world—the Notre-Dame de Paris. Follett then tells the story of the cathedral, from its construction to the role it has played across time and history, and he reveals the influence that the Notre-Dame had upon cathedrals around the world and on the writing of one of Follett's most famous and beloved novels, The Pillars of the Earth.

Ken Follett will donate his proceeds from this book to the charity La Fondation du Patrimoine."

Notre-Dame is a compilation of essays Ken Follett wrote during the week after the Notre Dame fire in April 2019.  From the title I was expecting information about the history of cathedrals in general and Notre-Dame de Paris in particular, and what they mean to the local people.   This isn't what the book is about.  There is a short chapter that covers the history of Notre-Dame.  Then there are short chapters on Victor Hugo and his book "The Hunchback of Notre Dame", the renovation of the cathedral by Viollet-le-Duc, Charles DeGaulle's victory mass after WWII, a bit about how Follett feels about the Cathedral, and a large quantity of Follett telling the reader about the novel he wrote that involved the building of a cathedral.  There are a handful of illustrations at the end.  This book is short and not particularly detailed, but does include some interesting tit-bits of information about Notre-Dame.  However, I wanted more substance.

NOTE:  Profits from the book, as well as author royalties, are to be donated to the Notre-Dame de Paris rebuilding fund. 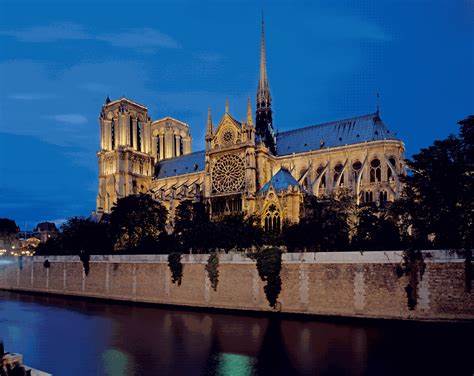