In Search of the Immortals by Howard Reid 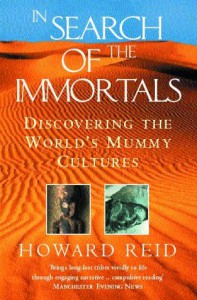 TITLE:  In Search of the Immortals: Mummies, Death and the Afterlife

"Everyone knows that the ancient Egyptians were great mummifiers, and their sarcophagi and bandage-wrapped corpses are familiar images to us all.  Yet across the vast sweep of history, we finid many other great cultures iin which the bodies of the dead were preserved as a matter of course.

In coastal Peru were the Chinchorros, whose mummifying culture flowered several millennia before Egypt's, and in the Andes were the Chachapoyas, the 'Cloud People', a lost civilisation which has only recently begun to be understood.  In China's Taklamakan desert, the oddly Caucasian-looking people who established the Silk Route, which made possible the first trade between East and West, have left behind stunningly lifelike mummies.  The ritually sacrificed bodies preserved in the peat bogs of northern Europe give us an extraordinary insight into life in the Dark Ages.  And in the Canary Islands, perhaps most surprisingly of all, lived the Guanches, whose sophisticated mummification techniques - and whose cultural links with the Egyptians - Howard Reid explores here for the first time.

Taking his extraordinary first-hand experiences of discovering and filming mummies all over the world as his starting point, Howard Reid brings these ancient cultures vividly to life.  And in so doing, In Search of the Immortals comes to represent his personal quest to find an answer to that most epic and timeless of human problems:  the meaning of death."

This is a nicely written, and somewhat personal, book (with colour photographs) about the author's quest to discover the meaning of death by taking a look at the cultures that preserved the bodies of their dead.  Reid starts off in the Old World with the mummies of the Taklamakan desert, Siberia,the bog people of northern Europe, the mummies of Ancient Egypt and the Canary Islands.  He then moves on to the mummy cultures of South America - the Chinchorros, the 'Cloud People' and what remains of the Inca mummies.  The author provides a description of the preserved bodies, how the mummies were created, some information about the cultures that produced them and a fair amount of speculation (where information is completely absent) about the religious views of these peoples and why they preserved their dead in this fashion.  This book is an overview of the various mummy cultures - not an extensive text on the subject.  I found this book to provide an fascinating glimpse into ancient civilizations and their view of the afterlife.