"Originally written only for his personal consumption, Marcus Aurelius's Meditations has become a key text in the understanding of Roman Stoic philosophy. This Penguin Classics edition is translated with notes by Martin Hammond and an introduction by Diskin Clay.

Written in Greek by an intellectual Roman emperor without any intention of publication, the Meditations of Marcus Aurelius offer a wide range of fascinating spiritual reflections and exercises developed as the leader struggled to understand himself and make sense of the universe. Spanning from doubt and despair to conviction and exaltation, they cover such diverse topics as the question of virtue, human rationality, the nature of the gods and Aurelius's own emotions. But while the Meditations were composed to provide personal consolation, in developing his beliefs Marcus also created one of the greatest of all works of philosophy: a series of wise and practical aphorisms that have been consulted and admired by statesmen, thinkers and ordinary readers for almost two thousand years.

Martin Hammond's new translation fully expresses the intimacy and eloquence of the original work, with detailed notes elucidating the text. This edition also includes an introduction by Diskin Clay, exploring the nature and development of the Meditations, a chronology, further reading and full indexes.

Marcus Aelius Aurelius Antoninus (121-80) was adopted by the emperor Antoninus Pius and succeeded him in 161, (as joint emperor with adoptive brother Lucius Verus). He ruled alone from 169, and spent much of his reign in putting down various rebellions, and was a persecutor of Christians. His fame rest, above all, on his Meditations, a series of reflections, strongly influenced by Epictetus, which represent a Stoic outlook on life. He was succeeded by his natural son, thus ending the period of the adoptive emperors."

This is a complilation of the private musings of a Roman emperor.  A great deal of these musings and pithy observations are still relevant today.  Some observations are profound and others provide inspiration.  The writing is direct with none of the obscurity of The Art of War by Sun Tzu.  Interesting and something to chew on, over a lenth of time.

"Do not waste the remaining part of your life in thoughts about other people, when you are not htinking with reference to some aspect of the common good.  Why deprive yourself of the time for some other task?  I mean, thinking about what so-and-so is doing, and why, what he is saying or contemplating or plotting, and all that line of thought, makes you stray from the close watch on your own directing mind."

"Think always of the universe as one living creature, comprising one substance and one soul:  how all is absorbed into this one consciousness; how a single impulse governs all its actions; how all things collaborate in all that happens; the very web and mesh of it all."

"Think constantly how many doctors have died, after knitting their brows oer their own patients; how many astrologers, after predicting the deaths of others, as if death were something important; how many philosophers, after endless deliberation on death or immortality; how many heroes, after the many others they killed; how many tyrants, after using their power over men's lives with monstrous insolence, as if they themselves were immortal.  Think too how many whole cities have 'died' - Helice, Pompeii, Herculaneium, innumerable others.  Go over now all those you have known yourself, one after the other:  one man follows a friend's funteral and is then laid out himself, then another follows him - and all in a brief space of time.  The conclusion of this?  You should always look on human life as short and cheap.  Yesterday sperm:  tomorrow a mummy or ashes.

So one should pass through this tiny gragment of time in tune with nature, and leave it gladly, as an olive might fall when ripe, blessing the earth which bore it and grateful to the tree which gave ti growth."

"The best revenge is not to be like your enemy."

"Dig inside yourself.  Inside there is a spring of goodness ready to gush at any moment, if you keep digging."

"Constantly reflect that ll the things which happen now have happened before:  reflect too that they will happen again in the future.  Have in your mind's eye whole dramas with similar settings, all that you know of from your own experience or earlier history - for example, the whole court of Hadrian, the whole court of Antoninus, the whole court of Philip, Alexander, Croesus.  All the same as now:  just a different cast."

"Practise even what you have despaired of mastering.  For lack of practice the left hand is awkward for most tasks, but has a stronger grip on the bridle than the right - it is practised in this." 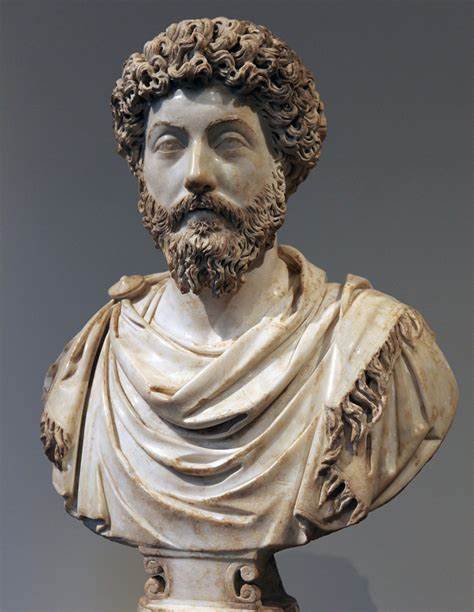