I last studied this play in school, so that's a long time ago.  However, I'm finding it much more enjoyable this time round, no doubt due to the lack of required dissecting and being "forced" to read it and being tested on it.

The Folger edition has some goodies included before the play.  An editors preface which tells you what the editors did and why; a bit of history about the play; a commentary of how to read Shakespeare's language; a short biography of the  man;  commentary about theatre in Shakespeare's time, and commentary about the publication of the plays.  These all provide solid and interesting additions to the play.  There is also an assay on the modern perspective of Macbeth after the play, as well as a further reading section.

The Folger edition has explanatory notes on the left page, and the text to the play on the right-hand page, which is rather more useful than flipping to the back of the book, or having one page cluttered with text and extra-notes.

I also listened to the Arkangel fully dramatised recording of Macbeth.  Not being an audiobook fan I found the experience interesting (accents, sound effects and actors that actually sounded excited) and the production rather good, though I did have moments of the usual wool-gathering.

Macbeth is a political drama/tragedy that happens to be a ghost story too.  I'm not going to summarise the contents of the first Act, but lets just say:  the witches are "poop"-stirrers, Macbeth needs to grow a spine or at least learn to tell his wife "No!" and stick with his decision, and Lady Macbeth.... well....lets just say I'm grateful that she isn't my mother-in-law - you never know what she's going to add to the cooking! Though I do wonder if she would have felt that way, or acted the way she did, if she actually had children?  Or had more life options than marriage and organising a castle?  Or maybe she would have transferred her ambitions for her husband to ambitions for the kids, or both?  There are some fine soliloquies and dialogues in the first Act.  We end with a murder planned but not yet executed!

The play was based (loosely) on a real King Duncan (a horrible king) and Macbeth, who managed to rule for 17 years.  The Real Duncan and Macbeth 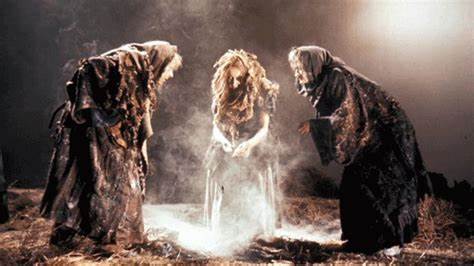