... in which we learn how about dyes from natural products such as leaves, bark, animals and minerals, the various discoveries and inventions of synthetic dyes, the various molecular structures of dyes that produce their visible properties, and the legacy of the dye trade.

"Tyrian purple is the dibromo derivative of indigo; that is, an indigo molecule that contains two bromine atoms. Tyrian purple was obtained from an opaque mucus secreted by various species of a marine mollusk or snail, most commonly of the genus Murex. The compound secreted by the mollusk is, as in the indigo plant, attached to a glucose unit. It is only through oxidation in the air that the brilliant color of Tyrian purple develops."

"Mythology credits the discovery of Tyrian purple to the Greek hero Hercules, who observed his dog’s mouth becoming stained a deep purple color as the animal crunched on some shellfish. The manufacture of the dye is believed to have started in the Mediterranean port city of Tyre in the Phoenician Empire (now part of Lebanon). An estimated nine thousand shellfish were needed to produce one gram of Tyrian purple. Mounds of shells from Murex brandaris and Purpura haemastoma can still be found on the beaches of Tyre and Sidon, another Phoenician city involved in the ancient dye trade."

"In 1865 the German chemist Johann Friedrich Wilhelm Adolf von Baeyer began investigating the structure of indigo. By 1880 he had found a way to make it in the laboratory from easily obtainable starting materials. It took another seventeen years, however, before synthetic indigo, prepared by a different route and marketed by the German chemical company Badische Anilin und Soda Fabrik (BASF), became commercially viable.

This was the beginning of the decline of the large natural indigo industry, a change that altered the way of life for thousands whose livelihood depended on the cultivation and extraction of natural indigo. Today an annual production of over fourteen thousand tons makes synthetic indigo a major industrial dye. Though synthetic indigo (like the natural compound) notoriously lacks colorfastness, it is most often used to dye blue jeans, where this property is considered a fashion advantage. Millions of pairs of jeans are now made from specially pre-faded indigo-dyed denim. Tyrian purple, the dibromo derivative of indigo, was also produced synthetically through a process similar to indigo synthesis, although other purple dyes have superseded it." 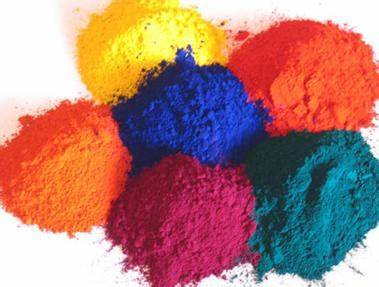