... In which we learn about various types of rubber, how their properties change according to the orientation of the polymers, the invention/production of various "rubber" based items, the history of Rubber Tree plantations in the Amazon and Congo Basin, synthetic rubber like styrene, and the hazards of using rubber seals on the doomes space shuttle Challenger.

"CAN YOU IMAGINE what the world would be like without tires for our cars and trucks and planes? Without gaskets and fan belts for our engines, elastic in our clothes, waterproof soles for our shoes? Where would we be without such mundane but useful items as rubber bands?

Rubber and rubber products are so common that we probably never think about what rubber is and how it has changed our lives. Although mankind has been aware of its existence for hundreds of years, only in the last century and a half has rubber become an essential component of civilization. Its chemical structure gives rubber its unique properties, and the chemical manipulation of this structure produced a molecule from which fortunes have been made, lives have been lost, and countries have been changed forever."

"Latex is a colloidal emulsion, a suspension of natural rubber particles in water. Many tropical trees and shrubs produce latex, including Ficus elastica, the houseplant usually referred to as the “rubber plant.” ...Though it is neither tropical nor a Euphorbia, the humble dandelion is yet another latex producer. "

"Natural rubber is a polymer of the molecule isoprene. Isoprene, with only five carbon atoms, is the smallest repeating unit of any natural polymer, making rubber the simplest natural polymer. The first chemical experiments on the structure of rubber were conducted by the great English scientist Michael Faraday. "

"In 1823, Charles Macintosh, a Glasgow chemist, used naphtha (a waste product from the local gas works) as a solvent to convert rubber into a pliable coating for fabric. Waterproofed coats made from this treated fabric were known as “macintoshes,” and raincoats are still called this (or “macs”) in Britain today. Macintosh’s discovery led to an increased use of rubber in engines, hoses, boots, and overshoes as well as hats and coats."

"Goodyear’s great discovery occurred in the winter of 1839, when he had been experimenting with powdered sulfur as his drying agent. He accidentally dropped some rubber mixed with sulfur on the top of a hot stove. Somehow he recognized potential in the charred glutinous mass that formed. He was now certain that sulfur and heat changed rubber in a way that he had been hoping to find, but he did not know how much sulfur or how much heat was necessary. With the family kitchen serving as his laboratory, Goodyear continued his experiments. Sulfur-impregnated rubber samples were pressed between hot irons, roasted in the oven, toasted over the fire, steamed over the kettle, and buried in heated sand.

Goodyear’s perseverance finally paid off. After five years he had hit on a process that produced uniform results: a rubber that was consistently tough, elastic, and stable in hot and cold weather. But having shown his ability as an inventor with the successful formulation of rubber, Goodyear proceeded to demonstrate his inability as a business-man. The royalties he gained from his many rubber patents were minimal. Those to whom he sold the rights, however, made fortunes from them. Despite his taking at least thirty-two cases all the way to the U.S. Supreme Court and winning, Goodyear continued to experience patent infringement throughout his life. His heart was not in the business end of rubber. He was still infatuated by what he saw as the substance’s endless possibilities: rubber banknotes, jewelry, sails, paint, car springs, ships, musical instruments, floors, wetsuits, life rafts—many of which later appeared." 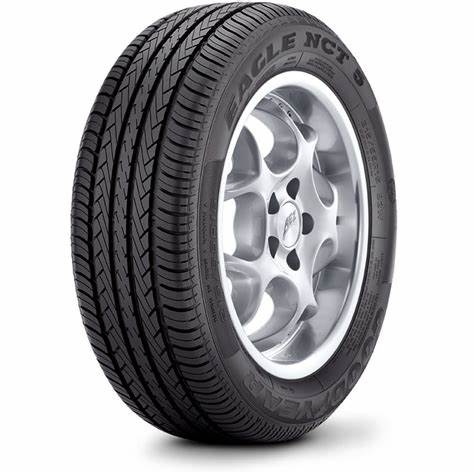 "Goodyear, who wasn’t a chemist, had no idea why sulfur and heat worked so well on natural rubber. He was unaware of the structure of isoprene, unaware that natural rubber was its polymer and that, with sulfur, he had achieved the all-important cross-linking between rubber molecules. When heat was supplied, sulfur atoms formed cross-links that held the long chains of rubber molecules in position. It was more than seventy years after Goodyear’s fortuitous discovery—named vulcanization after the Roman god of fire, Vulcan—before the English chemist Samuel Shrowder Pickles suggested that rubber was a linear polymer of isoprene and the vulcanization process was finally explained.

The elastic properties of rubber are a direct result of its chemical structure. Randomly coiled chains of the isoprene polymer, on being stretched, straighten out and align themselves in the direction of the stretch. Once the stretching force is removed, the molecules reform coils. The long flexible chains of the all-cis configuration of the natural rubber molecule do not lie close enough together to produce very many effective cross-links between the chains, and the aligned molecules can slip past one another when the substance is under tension. Contrast this with the highly regular zigzags of the all-trans isomer. These molecules can fit closely together, forming effective cross-links that prevent the long chains from slipping past one another—stretching is not possible. Thus gutta-percha and balata, trans isoprenes, are hard, inflexible masses, while rubber, the cis isoprene, is a flexible elastomer." 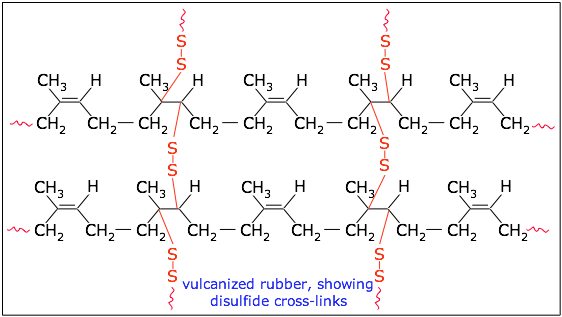 "Without rubber the enormous changes brought on by mechanization would not have been possible. Mechanization requires essential natural or man-made rubber components for machines—belts, gaskets, joints, valves, o-rings, washers, tires, seals, and countless others. Mechanized transportation—cars, trucks, ships, trains, planes—has changed the way we move people and goods. Mechanization of industry has changed the jobs we do and the way we do them. Mechanization of agriculture has allowed the growth of cities and changed our society from rural to urban. Rubber has played an essential part in all these events."