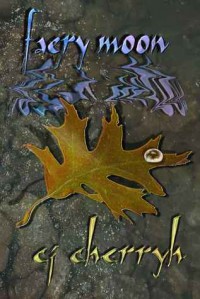 "A curse, a sin, and a dark bargain with the Sidhe had condemned Caith mac Sliabhan to wander the wild woods, outcast from all humankind. Only Dubhain—a pooka, a Sidhe sprite—was his companion. Caith now was bound to do the will of the Sidhe, always fearing that his own taint would somehow make him cause pain and sorrow to others.

But even an outcast like Caith could not resist taking refuge in a forest cabin, where two mysterious golden youths, a boy and girl, dwelled. "Husband and wife, we are," said the boy, but Caith could have sworn they were twins.

The mysterious couple were under a spell themselves—and despite his curse, Caith felt compelled to aid them. Caith soon fell into a dark adventure that led him and the Sidhe into the evil hands of the notorious witch of Dun Glas. "

Faery Moon is an expanded and heavily revised edition of "Faery in Shadow", also including the short story "Brothers".  This novel is set in the pre-Christian Schottish Highlands and makes use of Celtic mythology.  The faeries in this novel aren't the light, fluffy and helpful fairies of Tolkien or any children's tale.  I found the main characters to be well-written, three dimensional beings with their fair share of flaws.  The relationship between the stubborn, hot-tempered Caith and the wicked and feckless, but loyal Pooka is at times amusing.  This novel is rather dark, but it is delightfully written with vivid landscaping.  Besides, who doesn't like Pooka tales?

Faery in Shadow is a beautifully written novel, despite the issues Cherryh had with editors and publishing it.  However, Faery Moon is even better and with more Caith and Dubhain.