"When Tim Berners-Lee dreamt up the World Wide Web while working at the CERN particle-physics lab near Geneva in the early 1990s, the idea was to help physicists across the globe share scientific research data. He could never have predicted it would one day lead to people streaming endless cute animal videos on YouTube. " ...

. Our favourite tweeting animal, though, is Miguel Wattson, an electric eel (Electrophorus electricus), who lives in the Rivers of the World gallery at the Tennessee Aquarium in Chattanooga, US. He sent his first tweet in late 2014 under the handle @EelectricMiguel and although aquarium staff write his messages, Miguel controls when the tweets go out. Gadgets pick up the electrical pulses Miguel emits while roaming around his tank and a new tweet from a pre-written list hits social media if a pulse is above a certain strength.

The tweets are mostly groan-inducing animal jokes, such as ‘What is the strongest creature in the sea? A mussel!’, ‘What do you call it when it rains chickens and ducks? Fowl weather!’ and ‘Why do hummingbirds hum? Because they can’t remember the words!’ Meanwhile, an amplifier converts Miguel’s pulses into a stream of ‘pops’ that visitors hear as they wander through the aquarium. Each pop also triggers a light bulb, the brightness of which depends on the strength of the pulse – turning Miguel’s otherwise silent electrical emissions into a son-et-lumière feast." 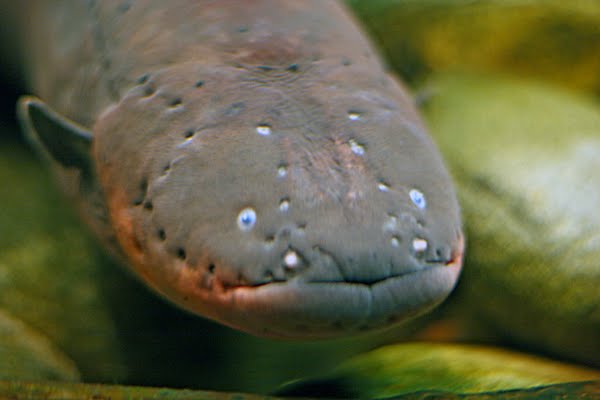