"As if causing fatal bleeding wasn’t enough, the Komodo dragon has another trick that lets it bite then hang back somewhere safe. Before 2006, biologists thought that bacteria in the dragon’s mouth infected its prey with septicaemia. But if that were true, the inflammation would take days to kill so the predator would ‘likely not enjoy the fruits of its labour’. Wroe’s colleague Bryan Fry from the University of Queensland discovered that the Komodo injects its victims with venom, using a poison that contains shock-inducing neurotoxins as well as an anticoagulant to prevent blood flowing out of the bite wound from clotting. This blood loss/poison double whammy helps the Komodo dragon kill animals up to the size of a water buffalo, some four times larger than itself, by inflicting life-ending injuries swiftly, then retreating and waiting for its victim to die. There is definitely fire in this dragon’s bite." 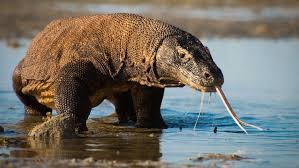