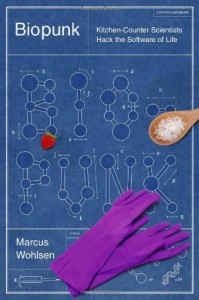 "The most disruptive force on the planet resides in DNA. Biotech companies and academic researchers are just beginning to unlock the potential of piecing together life from scratch. Champions of synthetic biology believe that turning genetic code into Lego-like blocks to build never-before-seen organisms could solve the thorniest challenges in medicine, energy, and environmental protection. But as the hackers who cracked open the potential of the personal computer and the Internet proved, the most revolutionary discoveries often emerge from out-of-the-way places, forged by brilliant outsiders with few resources besides boundless energy and great ideas.

In Biopunk, Marcus Wohlsen chronicles a growing community of DIY scientists working outside the walls of corporations and universities who are committed to democratizing DNA the way the Internet did information. The "biohacking" movement, now in its early, heady days, aims to unleash an outbreak of genetically modified innovation by making the tools and techniques of biotechnology accessible to everyone. Borrowing their idealism from the worlds of open-source software, artisinal food, Internet startups, and the Peace Corps, biopunks are devoted advocates for open-sourcing the basic code of life. They believe in the power of individuals with access to DNA to solve the world's biggest problems.

You'll meet a new breed of hackers who aren't afraid to get their hands wet, from entrepreneurs who aim to bring DNA-based medical tools to the poorest of the poor to a curious tinkerer who believes a tub of yogurt and a jellyfish gene could protect the world's food supply. These biohackers include:

Along with the potential of citizen science to bring about disruptive change, Wohlsen explores the risks of DIY bioterrorism, the possibility of genetic engineering experiments gone awry, and whether the ability to design life from scratch on a laptop might come sooner than we think. "

Biopunk provides an engaging look at what a variety of scientists are doing in their garages or kitchens without backing from universities or wealthy corporations.  Of course, some of the contents of the book (published 2011) will be outdated by now, but it still makes for interesting reading.  Wohlsen examines how and why these DIY scientists are doing what they are doing - this usually involves working beyond the restrictings involved in the extremely expensive specialized equioment, as well as the politics and rigid  environment of universities and biotech corporations.  This book also briefly deals with the potential consequences and challenges that are part and parcel of this type of citizen science.  The organisation is a bit erratic and the topics covered lacked depth - the science is explained in rather simplistic terms.  Each chapter of the book comes across as a separate essay or article about a specific DIY hacker, along with the obligatory interview.  The book is written by a journalist, which means you get more human interest stories than a detailed look at exactly what is going on in the kitchen/garage.

I did find the chapter on Indian farmers "hacking" Monsantos GMO seed stock the old fashioned way rather interesting and amusing.  The farmers saved the seeds produced by the GMO plants, crossed them with seeds native to India, saved and then traded the resulting native seeds which in the end produced plants that could cope better in the local conditions than the expensive GMO seeds.  And they did all this without paying a licensing fee.  Of course, Monsanto wasn't happy about this, but due to lack of regulation and motivation by the Indian government to do anything about this "theft" and hacking of GMO seeds, Monsanto couldn't do anything about it.

If you are looking for inspirational stories of citizen scienctists experimenting with DNA in the garage, this book may interest you.  In terms of in-depth science this book is rather lacking.