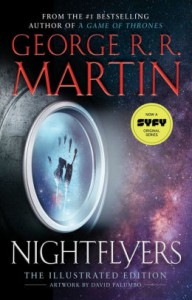 Well, there is the usual GRRM blood and guts - I think this was supposed to be a horror novellet but I wasn't particularly horrified.  There was an old idea with an interesting twist, of sorts.  Mediocre writing - the same descriptors and odd, made-up words used throughout.  The charaters were forgettable and flat.  I simply didn't give a damn what happened to them.  The dialogue was also rather flat.  We have a team leader that is insipid and apparently can't lead, and a know-it-all team that don't seem too interested in their project, that stupidly repeats the same mistake repetitively, and is surprised when they get the same bad results.  Lets just say I was hoping for some random space monsters to gobble up the space-ship people just to make things a bit interesting and raise the intelligence quotient on the ship.