On the Wing by David E. Alexander 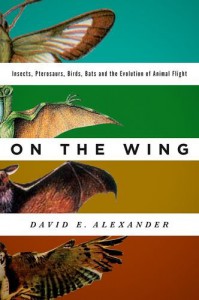 TITLE:  On the Wing: Insects, Pterosaurus, Birds, Bats and the Evolution of Animal Flight

"Ask anybody what superpower they wished to possess and odds are the answer just might be "the ability to fly." What is it about soaring through the air held up by the power of one's own body that has captivated humans for so long? David Alexander examines the evolution of flight in the only four animals to have evolved this ability: insects, pterosaurs, birds, and bats. With an accessible writing style grounded in rigorous research, Alexander breaks new ground in a field that has previously been confined to specialists. While birds have received the majority of attention from flight researchers, Alexander pays equal attention to all four groups of flyers-something that no other book on the subject has done before now. In a streamlined and captivating way, David Alexander demonstrates the links between the tiny 2-mm thrip and the enormous albatross with the 12 feet wingspan used to cross oceans.

The book delves into the fossil record of flyers enough to satisfy the budding paleontologist, while also pleasing ornithologists and entomologists alike with its treatment of animal behavior, flapping mechanisms, and wing-origin theory. Alexander uses relatable examples to draw in readers even without a natural interest in birds, bees, and bats. He takes something that is so off-limits and unfamiliar to humans-the act of flying-and puts it in the context of experiences that many readers can relate to. Alexander guides readers through the anomalies of the flying world: hovering hummingbirds, unexpected gliders (squirrels, for instance), and the flyers that went extinct (pterosaurs). Alexander also delves into wing-origin theory and explores whether birds entered the skies from the trees down (as gliders) or from the ground up (as runners) and uses the latest fossil evidence to present readers with an answer."

This is a clearly written, well researched and well illustrated book exploring the evolution of flight in insects, birds, bats and pterosaurs.