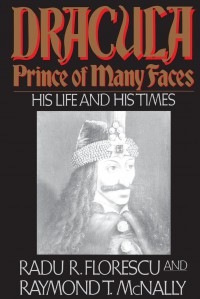 TITLE:  Dracula:  Prince of Many Faces (His Life & His Times)

"Dracula: Prince of Many Faces reveals the extraordinary life and times of the infamous Vlad Dracula of Romania (1431-1476), nicknamed the Impaler.  Dreaded by his enemies, emulated by later rulers like Ivan the Terrible, honored by his countrymen even today, Vlad Dracula was surely one of the most intriguing figures to have stalked the corridors of European and Asian capitals in the fifteenth century.

Florescue and McNally have written a a biography about Vlad the Impaler that is interesting, rich in detail, even-handed and circumspect.  The book does a wonderful job of weaving together Dracula's personal life and ambitions with the cultural, social, political and military realities of the time.  The authors also manage to separate fact from speculation without ruining the flow of the narrative.  They were also at pains to separate the myth from the man.  The book also examines Bram Stoker's Dracula novel in light of the real Dracula and his country.  Dracula:  Prince of Many Faces examines who Dracula was to various people - his family, his countrymen, the neighbouring states and his Ottoman enemies. Overall, this is one of the better biographies I have enjoyed.