SPQR: A History of Ancient Rome by Mary Beard 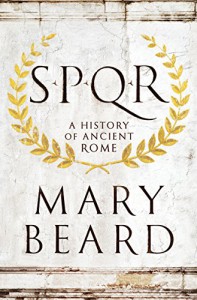 Mary Beard has writen an accessible history of the rise of Rome, it's people and it's senate.  The book deals with events that are dated to 753BC, and ends in 212 BCE with Caracalla's decree extending citizenship to all free men living within the Empire.  The book deals with those in power as well as the little people, how Rome expanded its power and maintained it.  Beard deals with archaeological and well as written sources for her information.  While the book was informative, the subject matter tended to be a bit superficial and the writing style too chatty.  This might make a good introductory text if the reader is not interested in biographies of important Roman citizens.

The Poison King: The Life and Legend of Mithradates, Rome's Deadliest Enemy
by Adrienne Mayor

Carthage Must Be Destroyed: The Rise and Fall of an Ancient Civilization
by Richard Miles