TITLE:  The Evolution Underground:  Burrows, Bunkers, and the Marvelous Subterranean World Beneath our Feet.

In this book, ichnologist Anthony J. Martin takes a look at how burrowing animals have evolved and influenced the ecology of this planet.  Martin starts off with alligators and gopher tortoises, ancient subterranean human settlements in Turkey and more modern underground Cold War bunkers, then travels through time to see what trace evidence and fossils prehistoric animals have left for burrowing behaviour - everything from the first worms, the first vertebrates and invertebrates, insects, dinosaurs, birds, penguins, giant ground sloths, crabs, shrimp, moles, gophers, earthworms and more.

Martin shows  that burrowing animals are ecosystem engineers that alter their habitats through burrowing action.    He provides a fascinating eye-opening account of earth altering underground activities that effect the flora and fauna that exist on the surface of the planet.

Martin also theorises that burrowing strategies of prehistoric and contemporary animals help in their survival during catastrophes and the survival of their species, and thus their evolutionary development, after the catastrophes.  Afterall, burrows provide shelter and protection, a reduction in extreme temperature fluctuations, minimized dessication during droughts, safe places to procreate and raise young, and on occassion food storage facilities.  Martin compares the survivors of major prehistoric catastrophes with the survivors of minor modern catastrophes, using examples like the pocket gophers that were hibernating during the eruption of Mt St. Helens.  The sleeping pocket gophers awoke to found an ash and lava covered landscape with minimal food, but due to a shortage in predators and a full storage larder, the gophers survived, prospered and also helped with seed dispersal and soil movement.

Martin is clearly passionate and knowledgeable about his subject.  This book adds a new perspective to evolution, extinction and ecosystem engineering.  There are 85 pages of note references, a whole wad of colour photographs/ illustrations, and a list of genera and species mentioned in the book.  The writing style manages to lively, fun, on the odd occasion amusing,  and informative at the same time. 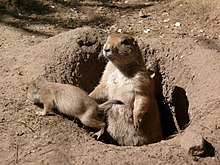