A is for Arsenic: The Poisons of Agatha Christie by Kathryn Harkup TITLE:  A is for Arsenic: The Poisons of Agatha Christie

"People are fascinated by murder. The popularity of murder mystery books, TV series, and even board games shows that there is an appetite for death, and the more unusual or macabre the method, the better. With gunshots or stabbings the cause of death is obvious, but poisons are inherently more mysterious. How are some compounds so deadly in such tiny amounts?

Agatha Christie used poison to kill her characters more often than any other crime fiction writer. The poison was a central part of the novel, and her choice of deadly substances was far from random; the chemical and physiological characteristics of each poison provide vital clues to the discovery of the murderer. Christie demonstrated her extensive chemical knowledge (much of it gleaned by working in a pharmacy during both world wars) in many of her novels, but this is rarely appreciated by the reader.

Written by former research chemist Kathryn Harkup, each chapter takes a different novel and investigates the poison used by the murderer. Fact- and fun-packed, A is for Arsenic looks at why certain chemicals kill, how they interact with the body, and the feasibility of obtaining, administering, and detecting these poisons, both when Christie was writing and today."

Kathryn Harkup has written a lovely book that explores the poisons used by Agatha Christie in her novels.  The introductory chapter provides some interesting biographical material of Christie and why she knew so much about poisons.  Harkup then dedicates the next 14 chapters to a specific poison, such as arsenic, belladonna, cyanide, digitalis, eserine, hemlock, monkshood, nicotine, opium, phosphorus ricin, strychnine, thallium and veronal (a type of barbiturate).  Each chapter describes how Christie used the poison in her novels, how the poison works, if there is an antidote, and examples of the poison used in real life.

I am not an Agatha Christie fan so found the sections describing Christie's novels and their plot summaries didn't particularly appeal to me, and also became tedious after a while.  Reading several plot summaries does not make for thrilling reading.  Harukp managed to avoid spoilers for the most part, or at least warned of spoilers before discussing pertinent Christie novels.  This will no doubt be appreciated for Christie fans who haven't read all of her novels.

The sections that describe how each poison effects the body were more interesting to me.  Harkup provided enough science to understand why substances were toxic without bogging the lay reader down with irrelevant detail.    Many poisons have similar effects on the body (i.e. they impair nerve functioning), so some sections were a bit repetitive by necessity.  Appendix 2 provides structures of a few of the chemicals described in the book, which was a nice addition.

The real life poisoning attempts were also interesting, especially the manner in which the poisoners were eventually caught.

This book would appeal to fans of Agatha Christie and for those who would like to know how a variety of poisons work.  There is no overall narrative, and each chapter can be read separately and out of order.  None the less, this is an interesting, informative and enjoyable book. 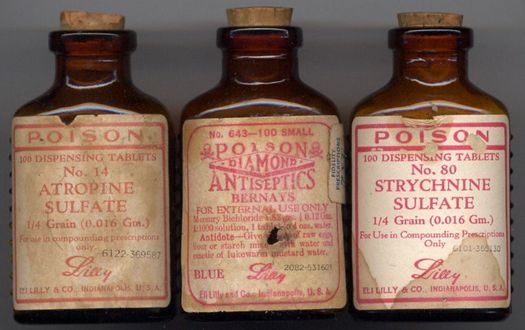