Rise of the Necrofauna by Britt Wray 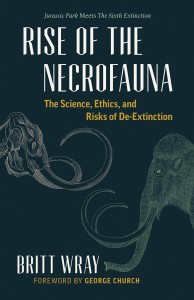 TITLE:  Rise of the Necrofauna:  The Science, Ethics, and Risks of De-Extinction

Rise of the Necrofauna is a wonderfully clearly written, enjoyable, extremely interesting, informative and engaging book that takes a broad look at the science, uses, ethics, and risks of de-extinction technology and organisms. Britt Wray provides a nice summary of the current status of the handful of de-extinction projects currently in existence, as well as providing interesting interviews with the scientists currently involved in these projects.

Chapter one provides a summary of the scientific methods involved in the various de-extinction efforts.  I would have preferred more details of the actual methods involved, such as is covered in How to Clone a Mammoth by Beth Shapiro.  However, what the author does write about the science involved is clear and easily understandable.

The remainder of the book covers topics on the ethics and uses of this technology, such as: why de-extinction is important; what species are good contenders and why; woolly mammoths and passenger pigeons; possible regulations for de-extinct species; uses of this technology in conservation efforts; and the risks involved.  A great many perspectives are investigated, but what is interesting is that the majority of scientific techniques developed for de-extinction projects has helped other scientific fields as well, and that their may be more than one way to bring back an extinct species or help an endangered species.

Most of the information and examples covered in this book is discussed (in one way or another) in How to Clone a Mammoth by Beth Shapiro, however, this book is better written even though it doesn't emphasize the science as much.  So, if you have read How to Clone a Mammoth you will probably not gain much more information from this book.  On the other hand, this is a lovely introduction to the concept and reality of de-extinction and its possibilities.

-How to Clone a Mammoth:  The Science of De-Extinction by Beth Shapiro (includes more about the actual science methods involved)

-Once & Future Giants: What Ice Age Extinctions Tell Us about the Fate of Earth's Largest Animals by Sharon Levy  (on rewilding)

-Where the Wild Things Were: Life, Death, and Ecological Wreckage in a Land of Vanishing Predators by William Stolzenburg (on rewilding)