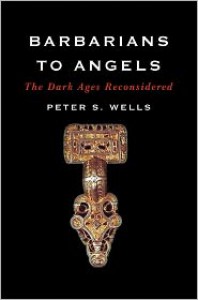 In Barbarians to Angels, Wells discusses his basic thesis that the “Dark Ages” weren’t quite so dark. That the barbarians “invading” the Roman Empire, adapted,  integrated and modified the Roman government institutions, but also retained a great deal of their own complex culture and institutions after the collapse of the Roman Empire.  Wells decides to focus his attention on the examination of archaeological materials to construct a picture of barbarian society in northern Europe.

In my opinion, Wells’ argument may well be correct, but he doesn’t convey this adequately (in this book) due to poor argumentation and the questionable interpretation and use of evidence.  The author continually states that the Dark Ages were a time of brilliant cultural activity, but fails to show this.  He keeps going back to the archaeological evidence and ignores any other type of evidence.  While Wells describes the archaeological features in detail, he fails to place these objects in a wider context or compare them with similar findings in the rest of Europe.  Wells’ also tends to focus on sites on the edge of the Roman Empire or even beyond its borders.  There is rarely any discussion of sites within what once was the Western Roman Empire.  There is also a lack of information of how his findings compare to what was happening in the area before the collapse of the Western Roman Empire.  The author does present some interesting information about the evidence for trade and culture and wealth that refutes the common misconception of savage barbarians plundering cities, ravished populations and empty landscapes.  But he doesn’t provide enough information to compare economic complexity during the Roman period and the post-Roman period.  For example, Wells demonstrates that Dark Age Europeans were capable of creating sophisticated goods and distributing them, but the why, how, and its relation to the earlier Roman period is not explained.

In general, this book is rather basic and bland and may well be intended as an introduction to the early Middle Ages or as a limited survey to the subject.  The writing style is easy to read with many photographs and maps, however, the argument is weak and unsatisfactory.

~Cathedral, Forge, and Waterwheel: Technology and Invention in the Middle Ages by Frances Gies, Joseph Gies

~Empires and Barbarians: The Fall of Rome and the Birth of Europe by Peter Heather

~The Celts by Alice Roberts

~A Brief History of the Anglo-Saxons: The Beginnings of the English Nation by Geoffrey Hindley

~The Inheritance of Rome: Illuminating the Dark Ages 400-1000 by Chris Wickham

~Framing the Early Middle Ages: Europe and the Mediterranean, 400-800 by Chris Wickham

~Before France and Germany: The Creation and Transformation of the Merovingian World by Patrick J. Geary

~In Search of the Dark Ages by Michael Wood