"The moon blew up without warning and for no apparent reason."

Seveneves is an entertaining, complex and thought provoking hard-science fiction book that takes a look at humanity, the good and the bad, during an apocalyptic event.

The book is split into three sections.  The first sections deals with humanities' preparation for the cataclysm that will result from the split moon.  The second section focuses on the people in space immediately after the cataclysm, who have the task of keeping the human species alive or the duration of the catastrophe.  The third part of the book takes a look at what happens when the Earth is made habitable again five thousand years after the cataclysm.

The author has a fondness for lengthy explanations and descriptions of new environments, but is short of character development.  There is a great deal of focus on hard science in this novel - everything from orbital mechanics, robotics and the physics of keeping a space station in space to genetic engineering and psychology.  However, this story is still enthralling, the world building is fascinating and the character cast entertaining and their interactions complex.  I enjoyed this book immensely, but wish there was more to the second and third sections.  There are some poignant moments, some funny moments, feats of heroics, and then there are the moments where you wish you could toss a particular character out the airlock!

NOTE:  Seveneves is a palindrome. 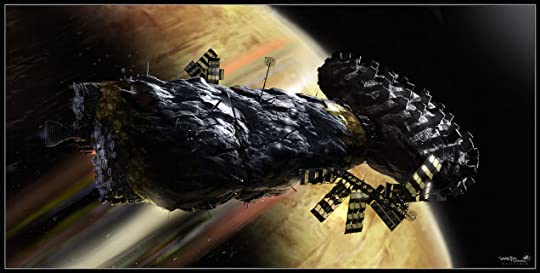