Tales From The Underground by David W. Wolfe 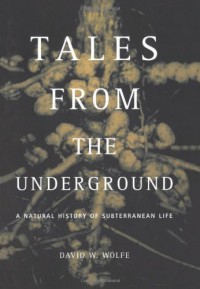 TITLE:  Tales from the Underground:  A Natural History of Subterranean Life

The subterranean is not one world but many.  It is filled with many unique habitats, and the occupants of these habitats range in size from the microscopic bacteria to the easily visible earth worms and burrowing animals.  Tales from the Underground is not intended as a comprehensive treatment of the subject of soil ecology.  The author's goal is to introduce the reader to a few of the most intriguing creatures on the underground and to the sometimes equally intriguing scientists and explorers who have studied them.   With the many interesting creatures and scientists discussed in this book, I feel the author has achieved his goals.

This book takes a look at the Earth's most ancient life forms, the extremophiles; bacterium; fungi; earthworms; the dual nature of soils with regards to deadly plant and animal diseases; the tragic history of human interactions with prairie dogs, burrowing owls and the black-footed ferret.  This book also explores the impact of human activities on the soil resources important to our food security and the potential for using soil microbes for intermediation of damaged soil.  The author also takes a look at the various hypothesis that try to explain the origin of life in which dirt or soil play a role e.g. the "clay-gene" theory in which clay crystals act as a catalyst and gene precursors.

The author states that he hopes that as more of us become aware of the life beneath our feet, we will be inclined to work together to maintain the biological integrity of the underground, an preserve some of what we find there for future generations.

"With each new subterranean discovery, it becomes more apparent that the niche occupied by Homo sapiens is more fragile and much less central than we once thought."

This book contains diagrams where relevant and a decent reference section.  However, the author tends to select too many examples and creatures from the U.S.A, which is a bit annoying, since there is an entire planet full of underground creatures and humans that interact with them.  The book is well written without excessive biographical detail and a fair amount of detailed information on each topic.  I believe this book would be easy to understand for the general reader.  Tales of the Underground provides an enjoyable look at some of the interesting underground citizens.