Ancient Geography: The Discovery of the World in Classical Greece and Rome by Duane W. Roller 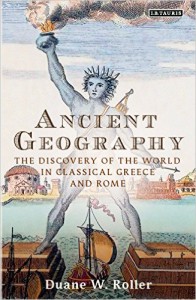 This book provides a summary and brief analysis of what the Classical Greeks and Romans knew or thought about the world around them in terms of geography and exploratory journeys.  The book basically does what it says on the cover, so there isn't much to comment  on.  This book would make a useful addition for someone researching geography during the Classical Greek & Roman age.  For the non-researcher this book may eventually get a bit tedious, even though it is interesting in parts. *  The Extraordinary Voyage of Pytheas the Greek by Barry Cunliffe.

*  Europe Before Rome:  A Site-By-Wite Tour of the Stone, Bronze and Iron Ages by T. Douglas Price.

*  In Search of the Immortals:  Discovering the World's Mummy Cultures by Howard Reid.

*  The Voyage of the Argo:  The Argonautica by Apollonius of Rhodes