The End of Food: The Coming Crisis in the World Food Industry by Paul Roberts 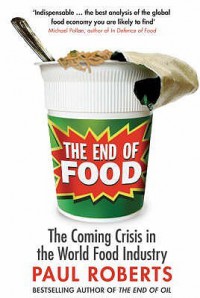 An interesting, and some-what worrying look at the emergence, ultimate costs and short-term benefits of large-scale food production over the world and the coming crisis in the world food industry.  A bit USA-centric.  This isn't a "fun' book to read, but it is informative and fairly well-written.

~  Food in History by Reay Tannahill

~  Against the Grain:  How Agriculture Has Hijacked Civilization by Richard Manning.~  Dirt:  The Erosion of Civilizations by David R. Montgomery.

~ Excitotoxins: The Tast that Kills by Russell L. Blaylock.

~ The Killers Within:  The Deadly Rise of Drug-Resistant Bacteria by Michael Shnayerson & Mark J. Plotkin.

~ Our Stolen Future:  Are We Threatening Our Fertility, Intelligence and Survival?  A Scientific Detective Story. by Theo Colborn, Dianne Dumanoski & John Peterson Myers.

~ Banana:  The Fate of the Fruit That Changed the World by Dan Koeppel.~  Tomatoland:  How Modern Industrial Agriculture Destroyed Out Most Alluring Fruit by Barry Estabrook.

~ The Untold History of the Potato by John Reader.

~  Why Did the Chicken Cross the World?:  The Epic Saga of the Bird that Powers Civilization by Andrew Lawler.

~ Domesticated:  Evolution in a Man-Made World by Richard C. Francis.

~  Papyrus:  The Plant that Changed the World:  From Ancient Egypt to Today's Water Wars by John Gaudet.

~  Water:  the Epic Struggle for Wealth, Power and Civilization by Steven Solomon.