The Celts: Search for a Civilization by Alice Roberts 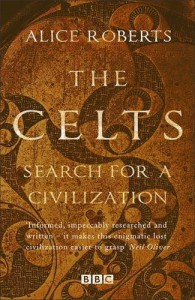 This book is about Alice Robert's search for the Celts - who they were, their history, their culture, their art and technology.  The author also takes a look at how much the current understanding of the Celtic World has changed in the past decade.  For us to understand why our views of the Celts have changed so drastically, Roberts explores the archaeological discoveries, the ancient histories and new linguistic evidence.

Roberts traces the movement of Celtic tribes in central Europe, Asia Minor, and the western Atlantic fringe of Europe, Britain, Ireland, France and Iberia.  The author starts her search for the Celts in central Europe with the discovery of the "Hochdorf Prince' in south-west Germany.  The grave goods of this discovery are examined in light of the local and Mediterranean trade networks and an examination of the relevant ancient texts.

The author then moves on to the archaeological discoveries of the Halstatt salt mines near Saltzbug, Austria and then onto the Celtic city of Heuneburg and the discovery of the "Bettelbuhl Princess" in southern Germany.  (Who knew the Celts had large cities!!). 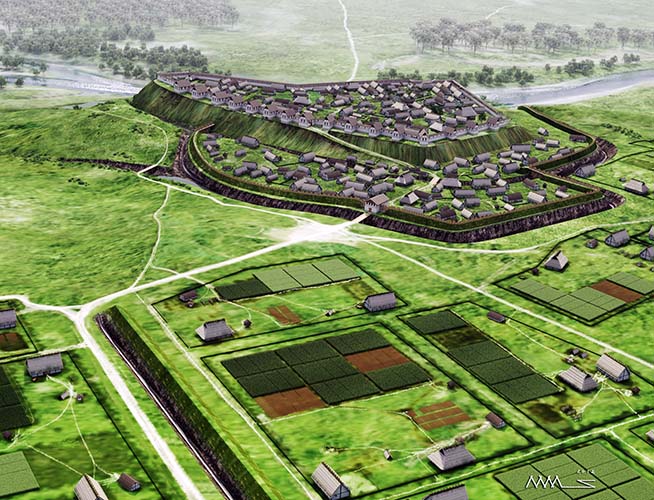 These finds suggests that large, complex societies with a need for international resources were flourishing in central Europe during the Bronze and Iron Age.  This is in contradiction to the usual assessment of impoverished barbarians eecking out a living beyond the Roman borders.  The evidence of large population movements of people (or lack thereof) and ideas in Iron Age Europe is assessed.  The book includes a brief history of the clashes that occur between the Celts and the Romans. The Urnfield, Halstatt and La Tene cultures are examined in light of new archaeological and linguistic evidence that has been discovered on the Iberian Peninsula.  A relatively new hypothesis suggests that the Celtic language might have developed from a branch of Indo-European in the western Mediterranean, flowed north into the Atlantic zone (western sea board and the British Isles) and later spreading back east into central Europe (via traders, metal-smiths and other craftspeople).  While this hypothesis is still disputed, it does make for interesting reading and an update to the previous books I've read on the subject.

Alice Roberts takes a brief look at the myths and religious practices of the Celts as illustrated by archaeological findings (e.g. bog bodies, possible human sacrifices, druids), but this is not covered in any depth.  The author made much of the fancy jewelry found in archaeological sites, but I was rather disappointed that the author didn't mention anything about Celtic technology, except a few comments about metal-smithing.  There was no mention of such things as:
their farming methods, especially their harvesting machine (Gallic Reaper); or
their road building (early roads); or
the Celtic Coligny calendar (Coligny calendar). The author provides books and articles for further reading, but there is no extensive reference list/bibliography which is unusual and rather annoying in a non-fiction book.  This lack of proper referencing and tying the text to a reference seems to be a bad habit that has appeared in the latest batch of popular non-fiction.  I sincerely hope this erratic referencing fad has a short life.

The book is a well written, current and interesting examination of who the Celts were, how they lived, and their interaction with the rest of the world.  The book includes maps were relevant and two sections of colour photographs.  Alice Roberts differentiates between fact and speculation, and also keeps all personal anecdotes to a minimum.  I would recommend this book to anyone who is interested in the Celts.  This book would also work very well as an introductory text to the subject, as it is neither complicated or boring, and has something of the flavour of a detective novel.