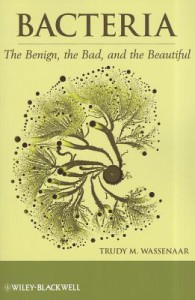 The author states that this book is meant to be an antidote. The aim of this book is to neutralize the bad reputation bacteria have acquired; show readers how ubiquitous and important bacteria are; educate readers on the vast field of bacteriology, instead of concentrating on one small corner; and to illustrate how bacteria are definitely not boring. This is an introductory text, so in depth explanations are not provided.

This book is designed for people that have little knowledge of bacteria, so I am not the intended target audience for this book. I feel this probably affected my enjoyment (and subsequent rating) as most of the contents of this book I have read elsewhere and usually in greater detail. However, for those people whose knowledge of bacteria is limited, this would make a good introductory text. Each chapter is rather short and covers a specific bacterial aspect. Technical science jargon is kept to a minimum. If the particular chapter topic does not appeal to the reader, he is welcome to move onto the next chapter without ruining the reading experience.

The book consists of short chapters that each cover a different aspect of bacterial structure, appearance, function, uses, locations and just weirdness. The first few chapters cover the origins and age of bacteria and their classification. I found this section a bit dull, but the subsequent chapters were interesting and covered such things as bacteria that have built in injectable needles; toxins; antibiotics; oil eating bacteria; industrial uses of bacteria; extreme living conditions; bacteria that like chewing up papyrus scrolls; bacteria in medicine and DNA replication; diseases; nitrogen-fixation; and bacteria that act like slime mold, etc.

An interesting book for those curious about bacteria.