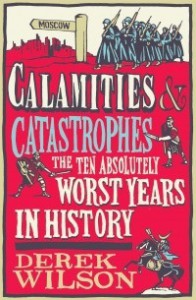 Some new information, but mostly old information.  Each chapter deals (rather briefly) with a different catastrophe or calamity in history, which the author as arbitrarily decided is the "worst year in history".  One chapter gives a brief overview of the Justinian Plague, another one mentions the effect of the weather on wars and population movement, but most of the chapters deals with humans butchering each other.  I would have liked to read more about the non-human factors (disease, weather, volcanoes etc) that cause havoc on human populations, rather than the all too common wars.   I found each chapter rather bland and too brief.