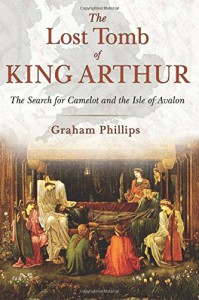 King Arthur is one of the most enigmatic figures in world history that has become familiar to us through many medieval tales, fables, novels, movies and TV series.  This had lead many scholars to regard King Arthur as a myth.  However, Graham Phillips has been determined to find the man behind the myth (if he exists) and has described his historical detective tale in this fast paced, well-written book.  The book also includes maps and illustrations where relevant.

Graham Phillips examines the earliest stories of Arthur as well as a variety of ancient manuscripts to determine the exact locations of Camelot, Arthur’s tomb, and the sword Excalibur.   In addition, the author visits various ancient monuments and post-Roman ruins to verify the literature.  Graham Phillips has shown through a substantial quantity of literary and scientific evidence, that King Arthur was a real man who unified the Britons to repel invasions from the Anglo-Saxons around 500 AD and that Camelot did in fact exist.  He also examines the evidence for other themes in the mythos, such as Excalibur, Morgana, Merlin and Mordred.  He seems to have determined the location of Camelot and King Arthur's burial place, however this would require expensive archaeological excavations to verify.

I have no desire to spoil the interesting and exciting detective work elucidated in this book by explaining the findings, so if you want to know the identity of Arthur, the location of Camelot, where King Arthur is probably buried, then you need to read this book.  I thoroughly enjoyed reading this book and definitely think the author is onto something.  I can't wait for someone, with too much money, to spend a little on excavating what is possibly King Arthur's tomb.