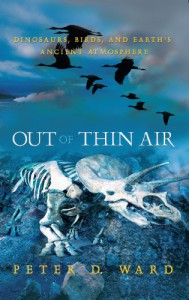 The author hypothesizes that with high levels of atmospheric oxygen, animals can grow very large, and do so because it protects them from predators.  When oxygen levels drop, extinctions occur, and the numbers of organisms of any surviving species drop, but body-plans proliferate as species strive to adapt.  More than any other required resources, oxygen is absolutely necessary for the survival of animals, their ability to meet the requirements of survival, and their ability to reproduce successfully.  As atmospheric oxygen levels have fluctuated over geological time, evolution has followed suit, with mass extinctions and certain evolutionary radiations occurring as oxygen dropped, and more evolutionary radiations occurring once oxygen began to rise.

I found the material in this book fascinating, informative and thought provoking.  The author provides many testable hypothesis and well as a large number of examples involving the structure and comparative functioning of lungs, gills, livers, feathers, hearts (four-chambered vs three chambered), bones, types of metabolism (endothermic vs exothermic), reproductive strategies (eggs vs live-birth) and body posture (bipedal vs lizard and mammal quadruped) in various atmospheric conditions.  The impact of plate tectonics and geochemistry (sulfur and carbon cycles) on oxygen levels are also explored. The black and white illustrations and graphs were also helpful, though it would have been even better if more animal illustrations of all the strange creatures had been included.

This book is written for intelligent adults and assumes that the reader has some knowledge of the various branches of science, such as biology, physics, chemistry, climatology, and geology.

Overall, a good book and quite insightful, but an editor would have been useful to smooth out the occasional clunky language.  I hope the author updates this interesting book with new information soon.