The Visitor by Amanda Stevens 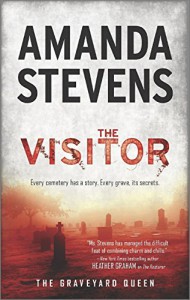 Another entertaining installment of the Graveyard Queen series by Amanda Stevens.  This mystery/thriller urban fantasy novel continues exploring the strange heritage of Amelia Rose Grey, Graveyard Restorer.  Years after their mass death, Ezra Kroll's disciples lie unquiet, their tormented souls trapped within the walls of Kroll Cemetery, waiting to be released by someone strong and clever enough to solve the puzzle.  Amelia Grey has been lead to the mysterious Kroll Cemetery by the living and the dead to solve the puzzle and release the trapped souls.

Epidemics and Society: From the Black Death to the Present by Frank M. Snowden

Progress: 5%
The Vampire Archives: The Most Complete Volume of Vampire Tales Ever Published (Vintage Crime/Black Lizard) by