The Baltic Origins of Homer's Epic Tales: The Iliad, the Odyssey, and the Migration of Myth 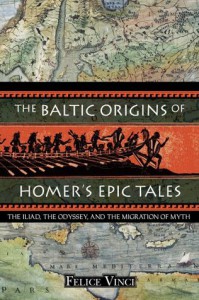 Have you ever tried to follow the Iliad or the Odyssey on a map and been annoyed when you couldn't match what was happening in the epics to the features on the map? Well, Felice Vinci makes a convincing argument that Homer's epic tales did not originate in the Mediterranean but in the Baltic Sea region of Northern Europe.

The book is grouped into four parts:
(1) tracing the voyage of Ulysses/Odyssius around the north Atlantic, locating Ithaca and comparing his adventures with those of Norse mythology.
(2) discovering the location of Troy and its neighbours as described in the Iliad, using the described geography, climate, customs, clothing, celestial movements/events, ship and weapon styles etc.
(3) investigating the origins of the Mycenaeans in the Baltic world at the time of the climatic optimum and exploring the geographic reality of Homer's wider Nordic world as presented in the Catalog of Ships (The Iliad).
(4) investigating the location of the primordial home of the Indo-Europeans, the reasons (climate change) that resulted in their southern movement, and the migration of their myths with a look at the solar, stellar, and lunar myths that suggest polar arctic origins.

The Baltic Origins of Homer's Epic Tales is an extremely interesting, well written, foot-noted, referenced book. I would recommend this book if you have any interest in The Iliad, The Odyssey, the origin of Indo-Europeans or the origin of ancient civilizations.
Tweet